Shine Bright – The Lighthouses of the North of Boston Part II 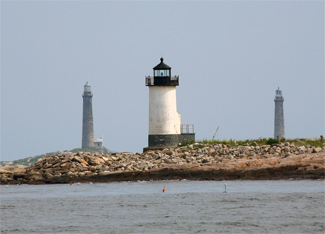 The lighthouses of Rockport. Photo via http://www.lighthousefriends.com/light.asp?ID=605.

Dotted along the coast of the North of Boston region are 12 wonderful lighthouses.  We recently introduced you to Salem’s three structures.  This week, we’re bringing you the lighthouses of Rockport. 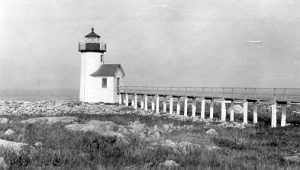 Overseeing Rockport’s Straitsmouth Island is the Straitsmouth Island Lighthouse.  A 37-foot stone structure, the lighthouse is the third in a series of unlucky light stations to be built on the island to mark the entrance into Rockport Harbor.  The first lighthouse, built in 1834, was a 19-foot structure erected in the wrong spot.  The location picked was more convenient for the contractor, but was misleading for sailors and other navigators.  The second lighthouse, built in 1851, was an octagonal structure built 87-yards from the first location, was further away from the light keeper’s house, but better-placed for accuracy.  Unfortunately, this one fell into disrepair and was torn down.  The current, third installment, was built upon its foundation. (*Fun Fact: In 1932, the color of the light was converted from white to green.  The current green light flashes approximately every six seconds). 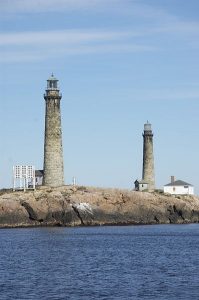 The only operating twin lighthouses in the United States, the Thacher Island twin lights are a unique feature in Rockport.  Originally sighted by the likes of Champlain and Capt. John Smith, Thacher Island itself got its name from a shipwreck on the island in 1635.  The only survivors were Mr. and Mrs. Anthony Thacher who were “awarded” the island by the General Court as consolation for having lost their children and friends in the wreck (…we don’t know why that was considered a good idea either…).

In 1771, the Island was sold back to the government and two 45-foot lighthouses were erected (the last lighthouses to be built under British rule in the US).  These lighthouses were replaced by the current 123-foot structures in 1861.   An aid to sailors, the structures point to “true north,” allowing navigators to check/adjust their compasses.

Today, Thacher Island is owned by the U.S Fish and Wildlife Service and is protected wildlife refuge.  However, the island is open to the public June through mid-September and you are welcome to visit via the Thacher Island Association’s launch or your own kayak or boat (there are three guest moorings available).  Depending on the weather, the North tower itself is open to explore.  Camping is also available during “operating” months (amenities are basic as there are no showers, fireplaces, or electricity available).  Be sure to take a tour of the Thacher Island Museum during your visit!